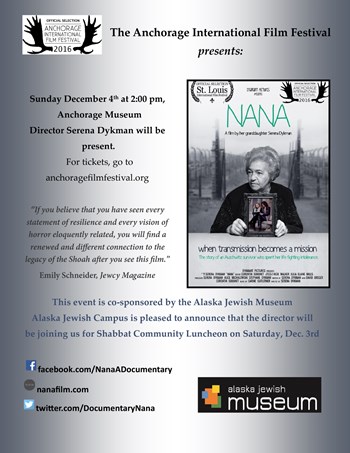 This year the Alaska Jewish Museum sponsored a film at the Anchorage International Film Festival. The film, NANA, was directed by Serena Dykman. The Museum also sponsored Ms. Dykman’s appearance at the Festival where she gave a talk and fielded questions from an enthusiastic audience. NANA tells the story of three women, of three generations, in three different regions: Poland, Belgium, and New York City. Alice and Serena, daughter and granddaughter respectively of Maryla Michalowski-Dyamant, convey the extraordinary story of this Auschwitz survivor, who was a passionate activist for remembrance and tolerance.